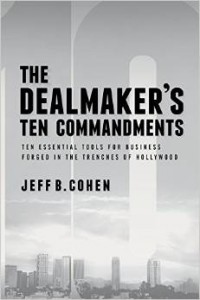 Business Tips and Tactics from the Trenches of Hollywood
Presented By: Jeff Cohen, Cohen Gardner LLP

Jeff B. Cohen is a graduate of UCLA School of Law with an emphasis in business law and co-founder of the law firm Cohen Gardner LLP. In 2013, Mr. Cohen was and named by Variety to its “Dealmakers Impact Report.” In addition, he was named one of the “Top 35 Entertainment Executives Under 35 Years of Age” by The Hollywood Reporter.

Mr. Cohen provided students with insights into the art of deal making drawing from his forthcoming book The Dealmakers Ten Commandments:  Business Tips and Tactics from the Trenches of Hollywood.  He developed his take no prisoners approach to negotiating deals from a lifetime of involvement in the entertainment industry and 15 years as a practicing attorney in Hollywood.