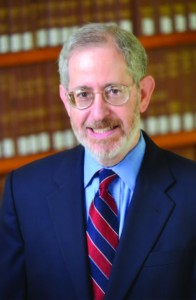 UCLA Professor of Law Kenneth N. Klee is a nationally recognized expert on bankruptcy law and a founding partner of Klee, Tuchin, Bogdanoff & Stern LLP.  Professor Klee’s extensive experience includes serving as associate counsel to the Committee on the Judiciary, U.S. House of Representatives, where he was one of the principal drafters of the 1978 Bankruptcy Code.  He has served as a consultant on bankruptcy legislation to the U.S. Department of Justice; as a member of the Advisory Committee on Bankruptcy Rules to the Judicial Conference of the United States; as a lawyer delegate to the Ninth Circuit Judicial Conference; and as a member of the executive committee of the National Bankruptcy Conference.  Professor Klee represented Jefferson County, Alabama under Chapter 9 of the Bankruptcy Code.  During this talk, Professor Klee discussed the causes of the Jefferson County bankruptcy and how the case was brought to a successful conclusion.