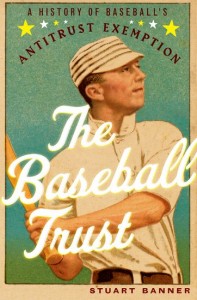 UCLA School of Law Professor Stuart Banner is a legal historian who has written about a wide range of topics in American and British legal history.  In this breakfast talk he explained how a series of court rulings resulted in one of the most curious features of our legal system-baseball's exemption from antitrust law. Banner provided a thoroughly entertaining history of the game as seen through the prism of an extraordinary series of courtroom battles, ranging from 1890 to the present. Professor Banner discussed such pivotal cases as the 1922 Supreme Court case which held that federal antitrust laws did not apply to baseball; the 1972 Flood v. Kuhn decision that declared that baseball is exempt even from state antitrust laws; and several cases from the 1950s, one involving boxing and the other football, that made clear that the exemption is only for baseball, not for sports in general. Banner revealed that for all the well-documented foibles of major league owners, baseball has consistently received and followed antitrust advice from leading lawyers, shrewd legal advice that eventually won for baseball a protected legal status enjoyed by no other industry in America.