Cocktails and Conversation – A Triumph of Genius: Edwin Land, Polaroid, and the Kodak Patent War 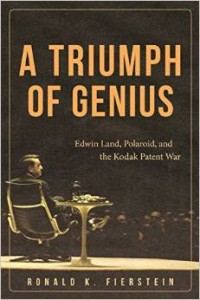 Author Ronald K. Fierstein described the details of one of our nation’s most important legal battles over intellectual property – Polaroid versus Kodak with insights gained through his participation in the case.  He told the story of this corporate and legal struggle of almost operatic dimensions.  What began as a cooperative and collegial relationship ended in Kodak’s betrayal.  Mr. Fierstein discussed the major testimony and turns in the epic legal battle, centered around one of the country’s most prolific inventors.